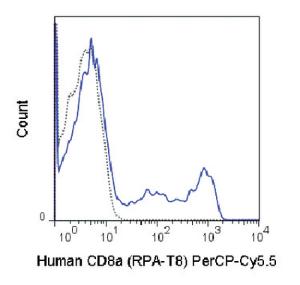 The RPA-T8 antibody is widely used as a phenotypic marker for CD8 on cytotoxic T cells, thymocytes, as well as on certain cell types that do not also express the TCR, including some NK cells and lymphoid dendritic cells. It is cross-reactive with CD8 in several non-human species, including Baboon, Chimpanzee, Cynomolgus and Rhesus. If used together with an alternative anti-Human CD8a clone, Hit8a, the RPA-T8 antibody will not block binding of Hit8a to CD8a.