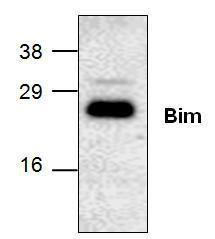 BIOV3124-100EA 6910 CZK
BIOV3124-100
Anti-Bim/Bod Rabbit Polyclonal Antibody
Protilátky
Members of the Bcl-2 family proteins all contain Bcl-2 homology domains including BH1, BH2, BH3, and BH4. The BH3 domain is known to be important for the cell killing activity of Bcl-2 members including Bad, Bax, Bid, Bik, and the recently identified BH3 domain containing protein designated Bim/BOD. Bim/BOD interacts with diverse members of the Bcl-2 sub-family including Bcl-2, Bcl-x, and Bcl-w, to induce apoptosis. There are three splice variants: BimL, BimS, and BimEL, all of which share homology in their C-terminal BH3 domains. Of the isoforms, BimS is the most potent inducer of apoptosis. The mRNA of Bim is ubiquitously expressed in multiple tissues and cell lines.