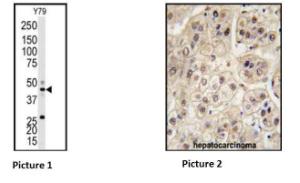 BIOV3171-100EA 9170 CZK
BIOV3171-100
Anti-PTP1B Rabbit Polyclonal Antibody
Protilátky
PTP1B is the founding member of the protein tyrosine phosphatase (PTP) family, which was isolated and identified based on its enzymatic activity and amino acid sequence. PTPs catalyze the hydrolysis of the phosphate monoesters specifically on tyrosine residues. Members of the PTP family share a highly conserved catalytic motif, which is essential for the catalytic activity. PTPs are known to be signaling molecules that regulate a variety of cellular processes including cell growth, differentiation, mitotic cycle, and oncogenic transformation. This PTP has been shown to act as a negative regulator of insulin signaling by dephosphorylating the phosphotryosine residues of insulin receptor kinase. This PTP was also reported to dephosphorylate epidermal growth factor receptor kinase, as well as JAK2 and TYK2 kinases, which implicated the role of this PTP in cell growth control, and cell response to interferon stimulation.