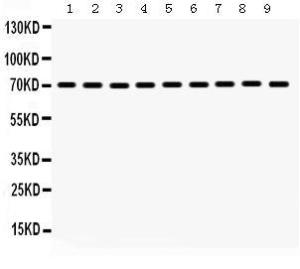 HSPA2 (heat shock 70kDa protein 2) is also known as HEAT-SHOCK PROTEIN, 70-KD, 2, HSP70-2, HEAT-SHOCK PROTEIN, 70-KD, 3 or HSP70-3. Analysis of the sequence indicated that HSPA2 is the human homolog of the murine Hsp70-2 gene, with 91.7% identity in the nucleotide coding sequence and 98.2% in the corresponding amino acid sequence. HSPA2 has less amino acid homology to the other members of the human HSP70 gene family. HSPA2 is constitutively expressed in most tissues, with very high levels in testis and skeletal muscle. The HSPA2 gene is located on chromosome 14q22-q24. Immunohistochemical analysis detected weak expression of HSPA2 in spermatocytes and stronger expression in spermatids and in the tail of mature sperm. HSPA2 may be critical to sperm maturation through its role as a protein chaperone.