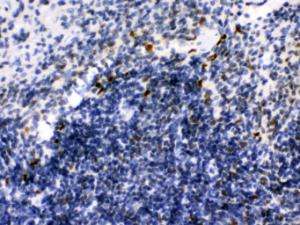 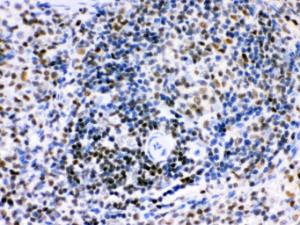 DNA-binding protein Ikaros is a protein that in humans is encoded by the IKZF1 gene. This gene encodes a transcription factor that belongs to the family of zinc-finger DNA-binding proteins associated with chromatin remodeling. The expression of this protein is restricted to the fetal and adult hemo-lymphopoietic system, and it functions as a regulator of lymphocyte differentiation. Several alternatively spliced transcript variants encoding different isoforms have been described for this gene. Most isoforms share a common C-terminal domain, which contains two zinc finger motifs that are required for hetero- or homo-dimerization, and for interactions with other proteins. The isoforms, however, differ in the number of N-terminal zinc finger motifs that bind DNA and in nuclear localization signal presence, resulting in members with and without DNA-binding properties. Only a few isoforms contain the requisite three or more N-terminal zinc motifs that confer high affinity binding to a specific core DNA sequence element in the promoters of target genes. The non-DNA-binding isoforms are largely found in the cytoplasm, and are thought to function as dominant-negative factors.